ADT Acoustic Beamformer is available on the above Platforms: Other configurations are available upon request. 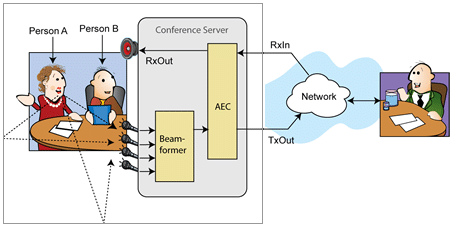 Notice that Person A’s speech has a direct path to the set of four microphones as well as an indirect path to these microphones. The beamforming algorithm causes the microphone gain to be maximum in the direction of Person A while she is speaking. By increasing the gain in that direction while reducing the gain in the direction of the reflective paths, we increase the signal-to-interferer ration, which reduces the reverb effect.

Similarly, but not show, this technique improves the signal to noise ratio because background noise tends to come from all directions, not just from the direction of the desired speech.

Care should be taken to ensure that analog circuitry and analog to digital converters for all microphones be designed with tight tolerances in order to provide for a minimum difference in gain, delay, frequency, and phase characteristics between the microphones.